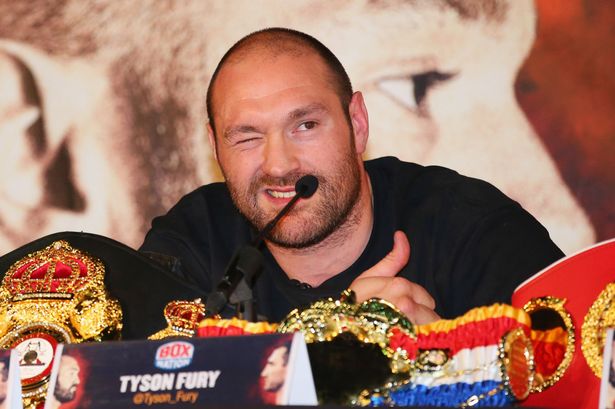 People often wonder, who do boxers look up to when they are an inspiration to other people themselves. The answer? Other boxers.

However, the fact that fans don’t have to fight their idols sets their relationship apart from that of the boxers and other fighters that they idolize.

But it seems like Tyson Fury and his relationship with Shannon Briggs is as good as the one between a fan and an idol.

The former heavyweight champion’s name is right alongside some of the greatest boxers in history. It is no wonder that The Gyspy King looks up to Briggs.

In a recent interview with iFL TV, Fury revealed that he might be open to fighting Briggs in an exhibition fight. However, he makes it clear that fighting Briggs with his title on the line is out of the question.

“I might have an exhibition with him but I won’t fight him. Where do we get off beating up on guys that are 50 years old?” said Tyson in the interview.

However, an exhibition fight against Briggs is something that Fury could get behind. “I’d love to get in the ring with him and have a move around with him and that.

Obviously, [Briggs will] try and take me out because he’s a massive puncher. But it’d be up to me to slip and slide, moving around to showing him a bit of respect.”

Fury puts great respect to The Cannon’s name, and rightly so. The veteran is the poster boy for health and fitness. He boasts of a physique that is rarely seen in men his age. And the undefeated WBC heavyweight champion cannot agree more.

“He’s an inspiration because the guy is in unbelievable shape for his age, absolutely shocking. I took so much motivation from Shannon in this comeback. I love the guy, absolutely love him,” said Fury while lauding Briggs.

The former WBO heavyweight champion recently stunned the world by signing with Bare Knuckle Fighting Championships. However, many feel that this move was rather inevitable.

The Cannon is most famously known for winning the lineal heavyweight title in a rather controversial majority decision over George Foreman in 1997.

It seems like the over-the-hill pugilist is looking to revive his career by fighting alongside Dat Nguyen and Nico Hernandez. Keeping his return to the combat sports circuit in mind, an exhibition fight between The Gypsy King and Briggs seems like a real possibility.