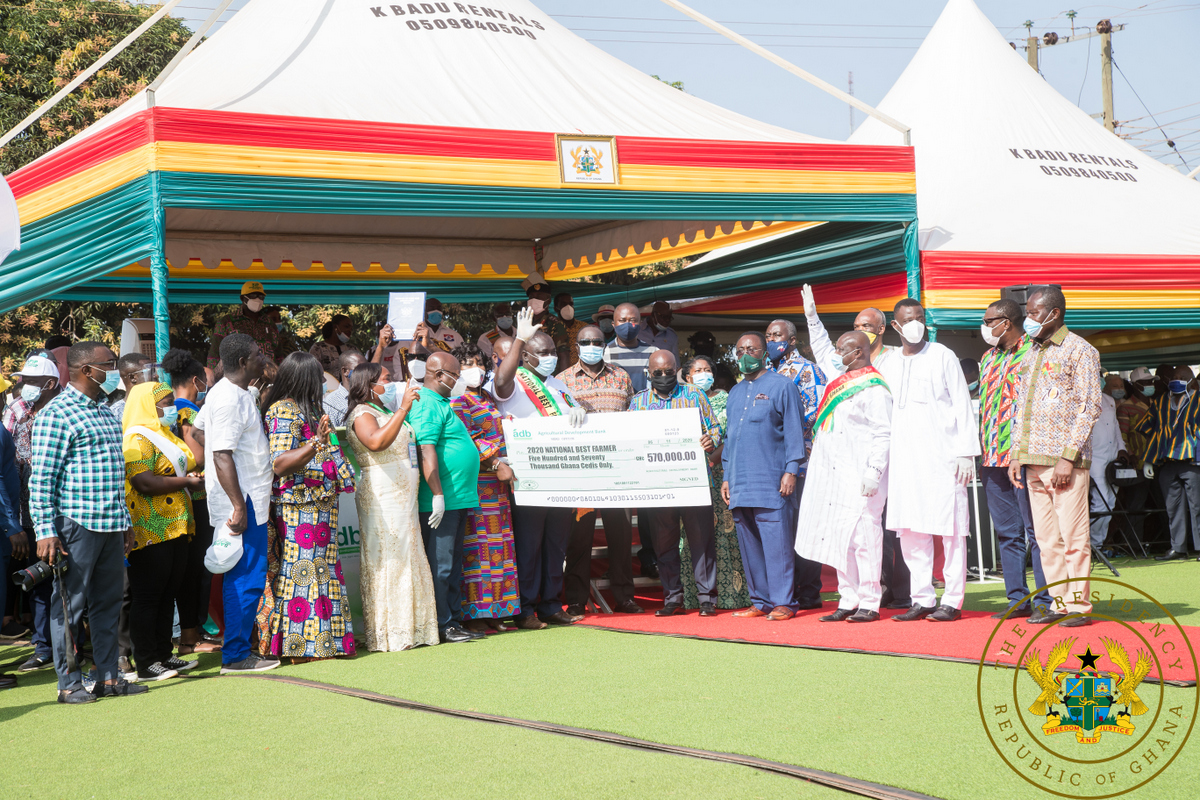 The President of the Republic, Nana Addo Dankwa Akufo-Addo, says his tenure of office, over the last three years and ten months, has seen to the creation of a vibrant agricultural sector in Ghana, with the country, during the period, transformed into a net-exporter of foodstuffs.

Speaking at the 36th Farmers’ Day celebration, which was held on Friday, 6th November 2020, in Techiman, capital of the Bono East Region, the President noted that, in the immediate years before his assumption of office, the performance of the agricultural sector was nothing short of abysmal, evidenced by growth rates of 0.9% in 2014 and 2.9% in 2016.

In order to remedy the situation, he told the gathering that his Government took the bold decision to embark on a well-thought through programme for the modernisation and transformation of Ghana’s agriculture, which included increasing productivity on smallholding farms; enhancing food security; diversifying agricultural export earnings; promoting agro-industrialisation and import substitution; and creating jobs for the youth.

“This led to the birth of the programme for “Planting for Food and Jobs” (PFJ), in April 2017, which provided strategic direction for realising the stated objectives. The initial focus of the programme was to support the productivity and output of selected food crops, through the provision of heavily subsidised improved seeds and fertilizers,” President Akufo-Addo said.

He continued, “The PFJ has since evolved, over the years, to reflect the comprehensive nature of Government’s strategy to improve agriculture with the introduction of five modules, i.e. food crops, Planting for Export and Rural Development (Tree Crops Module), Rearing for Food and Jobs (Livestock Module), Greenhouse Villages (Horticulture Module), and Farm Mechanisation and Agro-processing (Mechanisation Module)”.

All five modules, the President explained, have contributed to the creation of the vibrant agriculture we are experiencing in Ghana, albeit with some of the modules yet to be fully implemented.

“Today, our nation has banished the disgraceful spectre of importing tomatoes and plantain from Burkina Faso and Cote d’Ivoire respectively, we are now a net exporter of food, and our youth are venturing into fulltime agriculture,” he added.

According to President Akufo-Addo, the food crops module has resulted in an appreciable increase in yields of selected staples, with those of maize and rice, for example, increasing by 110% and 48% respectively from 2016 to 2019, whilst local production of rice accounts for 50% of domestic demand, up from 32% as at 2017.

With Ghana making considerable strides in its efforts to increase the use of fertilizer, from 8kg per hectare in 2016 to 20kg per hectare at the end of 2019, he indicated that Government has, since 2017, recruited 2,700 extension officers, translating into an improved extension officer to farmer ratio, from 1:1,908 in 2016, to 1:706.

Another major intervention under the food crop module, according to President Akufo-Addo, has been the construction of 80 one-thousand-metric ton capacity warehouses throughout the country.

Touching on the tree crops module of PFJ, popularly referred to as “Planting for Export and Rural Development” (PERD), which he launched in April 2019, President Akufo-Addo stated that Government has taken the decision to develop cashew, coffee, shea, mango, coconut, rubber and oil palm into cash crops, in addition to cocoa.

“The target for each of these selected crops is to earn a minimum of US$2 billion each year from 2028. This target translates to a total of some US$14 billion annually, compared to the US$2.3 billion from cocoa today,” he added.

This added focus, he stressed, “does not mean turning our back on the crop that has been the mainstay of the Ghanaian economy for over a hundred years – cocoa”, evidenced in the establishment of the $600 million National Cocoa Rehabilitation programme, and increase in the producer price for a bag of cocoa from GH¢415 to GH¢660, the highest ever in the nation’s history.

Explaining the rationale for the establishment of this module, President Akufo-Addo indicated that the purpose of the module is to scale up local production of poultry and livestock, as well as to reduce the country’s dependence on meat imports, valued annually at US$340 million.

“Commencing in 2019, with the distribution of improved breeds of small ruminants, pigs and cockerels to farmers throughout the country, Government is currently facilitating access to concessionary loans for value chain actors to support production, processing and marketing of meat products. At full-scale, it is projected to reduce progressively the importation of meat products in the country by up to 70% by the year 2025”, he said.

Government, President Akufo-Addo said, is promoting the greenhouse village concept to ensure the production of high value vegetables for local consumption, and to enhance the competitiveness of Ghana’s horticulture products on the international market.

“I have, thus far, commissioned three (3) greenhouse villages at Dawhenya in the Greater Accra Region, Akumadan in the Ashanti Region, and Bawjiase in Central Region. Two hundred and ninety-six (296) university graduates and diploma holders have been trained, with one hundred and ninety (190) of them benefiting from an eleven (11) month paid internship in the Kibbutzim in Israel,” he added.

In order to move away from the dependence on manual labour that smallholder farmers have become accustomed to, President Akufo-Addo stated that Government, through the More Food Programme, has supplied 230 tractors and 11,450 assorted machinery and equipment from Brazil, since 2017.

Additionally, concessionary agreements have been concluded with India and the Czech Republic for the supply of a large consignment of farm and processing machinery, including hand-held farm implements to be sold at a subsidised rate.

“From 2021, the Exim Bank of India will facilitate the supply of farm machinery, agro-processing and other value-adding machines to the tune of one hundred and fifty million United States dollars (US$150 million),” he said.

Chairperson, let me also give an account of some of the other interventions put in place by Government to boost the development of agriculture.

With Ghana having, since independence, put only 3.2% of its arable land under irrigation, President Akufo-Addo told the gathering that “since 2017, the Ghana Irrigation Development Authority (GIDA) has completed 10 out of 14 small dams.”

Additionally, he added that the rehabilitation of the Kpong Left and Right bank irrigation schemes and the Tono irrigation scheme is ongoing, and, once completed, 7,690 hectares of land will be put under irrigation.

“Government has also initiated the construction of the Pwalugu Multipurpose Dam, which will put an additional 24,000 hectares of land under irrigation. Additionally, the Ministry of Special Development Initiatives has constructed some 500 small dams in the Northern Regions of Ghana,” he added.

One clear indicator attesting to the overwhelming success of the food crops module under the PFJ, according to President Akufo-Addo, is the export of Ghana foodstuffs to neighbouring countries.

“Based on official records at the Statistics Research and Information Directorate of the Ministry of Food and Agriculture, Ghana exported some 130,000 metric tons of 19 different food items to neighbouring countries in 2018, valued at the equivalent of US$90 million. Reports of scores of traders from neighbouring countries in the ECOWAS Region doing brisk business in grains in the northern parts of the country are clear indications of the new business opportunities opening up in the country for agriculture,” he said.