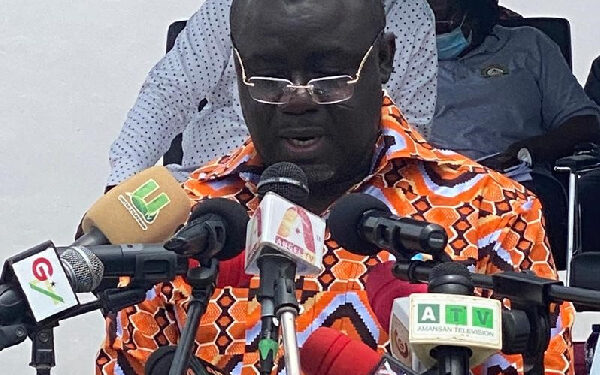 The controversy surrounding the award of contract to Frontiers Healthcare Services, a company undertaken COVID-19 testing at the Kotoka International Airport (KIA), has been put to rest by the Minister-designate for the Ministry of Transport, Hon. Kweku Ofori Asiamah.

Opening up on the matter when he appeared before the Appointments Committee of Parliament on Tuesday, February 23, 2021, for public hearing on issues relating to the portfolio he has been designated to by the President of the land after receiving briefing from the Ghana Airports Company Limited (GACL, Hon. Asiamah, said the Ghana Airport Company Limited (GACL), which operates the KIA, only rented its space to Frontiers Healthcare Services.

This, he noted, was done after receiving confirmation from the Food and Drugs Authority (FDA) about the certification of equipment to be used by Frontiers Healthcare Services.

Three ministerial nominees who had so far appeared before the Appointments Committee have failed to give a convincing account on the procurement processes that led to the award of a contract to Frontiers Healthcare Service to conduct COVID-19 testing at the KIA at a fee of US$150.00 per head.

The Health Minister-designate, Hon. Kwaku Agyeman-Manu, told the Committee when he was confronted with the issue by Hon. Samuel Okudzeto Ablakwa, a member of the Committee, that it was the Presidential Taskforce and Ghana Health Service (GHS) that were involved in the award of the said contract and therefore, could not give further details about the deal.

The then Chief Procurement Advisor to the President and now Minister-designate for the Ministry of Gender, Children and Social Protection, on her part referred the Committee to the Minister of Finance who has oversight responsibility over the Public Procurement Authority (PPA).

The Information Minister-designate, Kojo Oppong Nkrumah, also referred the Committee to the Ghana Airports Company Limited when he was questioned about the deal.

Explaining further, Hon. Asiamah, said by a letter dated 25th August, 2020, the FDA wrote to GACL indicating that it had approved of the equipment of Frontiers Healthcare for use in the detection of SARS-COV-2 in Ghana. The on-site audit report carried on the equipment was attached to the letter, he noted.

He said following receipt of this information, GACL, intending to enter into an agreement with Frontiers Healthcare by which GACL would rent part of its space to the laboratory service provider to render the service in question to the public, wrote to the Public Procurement Authority (PPA) to seek its approval before executing any agreement with Frontiers Healthcare.

“By a letter dated 26th August, 2020, the PPA replied to the GACL advising that the rental of office space by GACL to another company falls outside the scope of the PPA Act as amended. GACL was therefore advised by PPA to use its administrative procedures to execute the transaction. Consequently, on 1st September, 2020, GACL entered into an agreement with Frontiers Healthcare to rent its office space to the company for consideration. The agreement was essentially for rental of office space. Paragraphs 4.4, 4.6, 4.7, 5.1 and 5.2 bear this out. The consideration payable by Frontiers was simply the payment of rent and service or utility charges”, Hon. Asiamah explained.

In the said rent agreement the GACL entered into with Frontiers Healthcare Services, the Transport Minister-designate revealed that the laboratory service provider was also required to make a payment of royalties of US$10.00 per each test done to the GACL.

“The payment of royalties to GACL did not imply that the agreement had to receive PPA approval”, he stressed.

He added “Indeed, a precondition for an application of the PPA Act, and for that matter, obtaining PPA approval, is the use of public funds in the procurement of goods, works and services. GACL did not procure the services of Frontiers with public funds. The company offered to provide laboratory services to the public with their own equipment. No public funds was expended in getting them to provide the services to the public, apart from the provision of office space. Thus, the basic condition for an application of the PPA Act did not exist. In any case, GACL endeavoured to obtain PPA approval in respect of the contract for the rental of its space to the company. As stated already, the PPA indicated that the rental of office space falls outside the scope of the Procurement Act”.