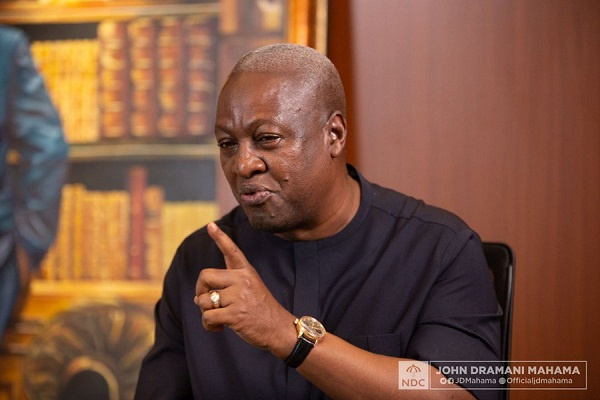 The 2020 Presidential candidate of the National Democratic Congress (NDC), John Dramani Mahama, has said he is finding it very difficult to let happenings of the 2020 general elections go considering the over the six million Ghanaians that voted for him and the umbrella family.

According to him, he finds it weird the way the President of the Republic and the Electoral Commission conducted the 2020 polls and the result declared in favour of Nana Akufo-Addo, noting that they might end up in court to challenge the outcome of the polls.

He said he will only accept the 2020 presidential result if the EC conducts an independent audit of the result.

The Chairperson of the EC, Madam Jean Mensa, as the Returning Officer of the Presidential poll, announcing the winner of the December 7 Presidential election told Ghanaians that her outfit recorded 13,434,574 valid votes cast out of which the Presidential Candidate of the New Patriotic Party (NPP), Nana Addo Dankwa Akufo-Addo secured 6,730,413, representing 51.59%, and making him the President-elect.

“It is my honour as the Electoral Commissioner of Ghana, to declare Nana Addo Dankwa Akufo-Addo as President-elect of the Republic of Ghana”, she declared.

The outcome of the Techiman South constituency poll, she added, is currently in dispute by the political parties, noting that, if all the votes are even added to that of Mahama, it will have no effect on the outcome of the election.

However, the EC in its release dated Thursday, December 10, 2020, summarizing the 2020 Presidential Election results admitted some discrepancies in the figures Chairperson Jean Mensa announced on Wednesday but noted that it has no effect on the outcome declared.

According to the NDC, their analysis of the pink sheets available to them shows clearly that Mr. Mahama won the elections.

Interacting with Voice of America (VOA) Mr. Mahama said the flawed elections could not be swept under the carpet, noting that the right things must be done to safeguard the country’s democratic credentials.

“We are currently doing a forensic audit of all the constituencies first to establish what happened and then confirm the figures that we have. Because this case might end up in court…I don’t know, I cannot mention anything for now but we are doing an audit and based on that we’ll take whatever decision we need to take.

“But I think that in the interest of the more than 6million people who voted for me, I must uphold our democracy and hold the Electoral Commission to a higher standard and hold this government to a higher standard in terms of our democracy. The way President Akufo Addo and the EC have conducted this elections is a dent on our democratic credentials as a government. And so with my principles as a democrat, I can’t be seen to be sweeping it under the carpet and letting it go.”

Ex-President Mahama added: “I think that we must bring closure to this by seeing exactly where the issues are. If an independent audit is done by the EC, they’ll bring somebody in to crunch the numbers do an independent audit why not, I’ll be the first person to concede and walk away. But as long as that is not done and I know that there was a deliberate attempt to subvert the will of the people in favour of the incumbent it will be wrong for me in terms of our democratic practices to just leave it because we’ll not learn the lessons of this election. I think we must learn the lessons of this election so that we don’t repeat it in future one.”