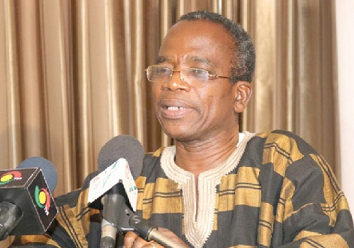 The National Media Commission (NMC) has held an emergency meeting in Accra to consider issues relating to the directives issued by the Minister of Communications, Hon. Mrs. Ursula Owusu-Ekuful, to the Ghana Broadcasting Corporation (GBC) and Crystal TV, regarding their broadcasting channels on the National Digital Terrestrial Television (DTT) platform.

Among the issues examined by the Commission:

iii. a letter from the Minister for Information to the NMC dated July 16, 2020;

Minister of Information, Kojo Oppong Nkrumah, who appeared before the Commission gave detailed explanation of what constituted his understanding of the issues.

However, the Commission in a statement released by its Chairman, Yaw Boadu-Ayeboafo, after their encounter with the Information Minister, expressed the belief that any discussion on the matters at stake should be situated within the overall context of the 1992 Constitution of the Republic of Ghana.

The Commission added “Political control can emanate from overruns on the right of the Board and Management to prudently manage the resources of the Public Broadcaster in accordance with sound public administration principles. It is the view of the Commission that any action by any entity which culminates into limiting or depriving the media of the use of public resources legitimately allocated to them undermines their capacity to serve the nation as anticipated by the Constitution. The Commission wishes to state clearly that the directive given to GBC and Crystal TV by the Minister for Communications purports to usurp the constitutional mandate and authority of the National Media Commission and same cannot be obliged under our current constitutional dispensation. We wish, however, to take advantage of the current discussion to draw public attention to the Commission’s concerns regarding the operations, management and governance of the National DTT platform”.

In the view of the Commission, broadcasting at all material times has involved two elements. These elements, they noted, are content production and transmission. The two combine to constitute the broadcast medium.

“The DTT platform is the new technology for broadcasting transmission. It is indeed part of broadcasting. It should therefore be treated as media to enable it benefit from all the freedoms guaranteed the media by the 1992 Constitution. Second, it is state-owned. Therefore, it must be covered by the constitutional provisions on the state-owned media. Third, it is uniquely positioned as the medium through which all free-to-air broadcast content can be transmitted to reach the Ghanaian public. Accordingly, it sits at the gateway of public communications with the capacity to determine whose ideas get communicated within the public sphere. It would be unhelpful to democracy to leave the control of the gateway to public communications in the hands of a Minster of State. Allowing politicians to control the gateway to public communication would introduce vulnerabilities into the constitutional firewalls of free expression in Ghana. To put our concerns on the DTT in context, we wish to state that the National Media Commission has always held and articulated the foregoing view since the process of migration started a little over a decade ago. In the intense partisanship of public policy debate in Ghana, we feel obliged to reiterate that this is not only a matter of fact, but also that of principle”, the Commission added.

The National Media Commission has however, assured the general public that it is highly aware and alert to the huge responsibility it bears as the shepherds against any form of encroachment by individuals, politicians and state agencies on the freedom and independence of the media, and we shall continue to perform our constitutionally-mandated guardian role with high sense of dedication, alertness and patriotism.