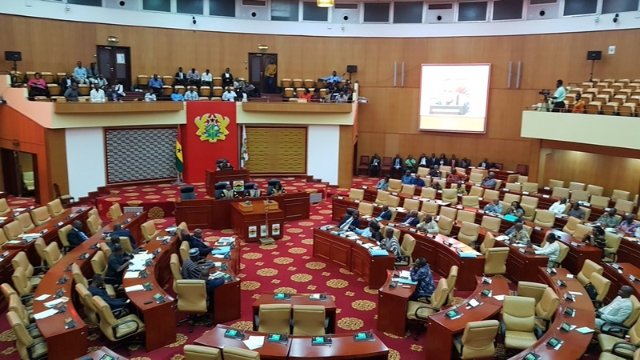 The Parliament of Ghana is insisting that it did not lie about the health status of lawmakers and staff of the Parliamentary Service in relation to the novel Coronavirus (COVID-19).

The House still maintains that as at Tuesday, May 26, 2020, it has no knowledge about the test results of some MPs as well as staff of the Parliamentary service.

The Speaker of Parliament, Rt. Hon. Prof. Aaron Michael Oquaye, had on Tuesday, May 19, 2020, directed all MPs and staff of the Parliamentary Service to undergo a mandatory test of the novel Coronavirus.

The directive was subsequently followed, with Medical Staff in Parliament, making available test materials and apparatus to carry out the exercise from Wednesday, May 20 to Friday May 22, 2020.

A report by www.starrfm.com.gh on Tuesday, May 26, 2020, had stated that two MPs and 13 staff of the legislature had tested positive for the COVID-19 and have been told to self-isolate for some number of days.

Parliament led by the Majority Leader, Hon. Osei Kyei-Mensah-Bonsu, told reporters at a press conference in response to the news article that Parliament has no knowledge about the test results of the said two MPs and 13 staff of the Parliamentary Service since the entire results from the COVID-19 had not been released to the legislature.

A press release which was subsequently issued by the Public Affairs Directorate, Parliament of Ghana, had maintained the stance of the Majority Leader, and requested www.starrfm.com.gh to pull down the story on the basis that the facts (test results of the COVID-19) were not known the directorate.

However, on Wednesday, May 27, 2020, the Minority Chief Whip, Hon. Mohammed Mubarak-Muntaka, put Parliament in a tight corner when he confirmed in his interview with Joy Prime, that two lawmakers and thirteen staff of the Parliamentary Service had tested positive for the coronavirus and have been isolated while contact tracing had commenced.

The Minority Chief Whip, therefore, wondered why the Director of Public Affairs, Parliament of Ghana, will lie in the said matter as directed by the Majority Leader, Hon. Osei Kyei-Mensah-Bonsu.

Despite Hon. Muntaka giving credence to the story published by www.starrfm.com.gh, Parliament still insists that its position on the matter has not changed.

A statement issued by the Public Affairs Directorate dated May 27, 2020, in part read “We would like to put on record the Majority Leader is in no way involved with the process of testing. The duty of coordinating the testing process is that of the Medical Directorate in Parliament, who told Parliament specifically that the results of the tests were not yet known by Parliament as at Tuesday, May 26, 2020. To attribute lies to the Public Affairs Department, the Majority Leader and the entire Parliament is therefore unfortunate”.

The statement added “Parliament wants to put on record that it has no particular interest in hiding the results of the tests. Parliament would also like to make specific reference to a news release dated 26/05/2020 signed by the Director of Public Affairs which requested the media house to pull the story down on the basis that the facts were not true since they were not known to the directorate and would like to state that this assertion does not mean that the House denied the possibility of anyone testing positive for COVID-19. It therefore, is rather that this was interpreted to mean a denial of a possible positive test result, leading to media reports that Parliament lied. We wish to state that categorically that the Majority Leader is the leader of the House and performs his duties as such. He does not deal with the day to day running of the various departments of the institution and could not have told the Director of Public Affairs to lie either on his behalf or on that of the institution”.