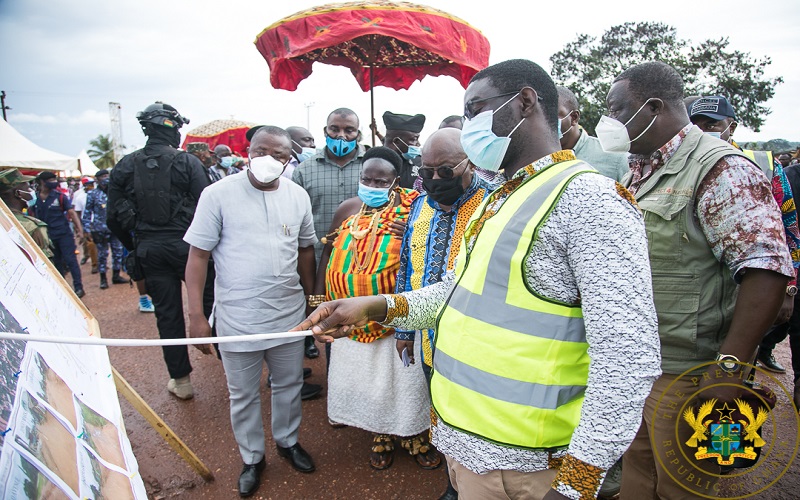 The President of the Republic, Nana Addo Dankwa Akufo-Addo, has cut the sod for the commencement of construction of the town roads in Tuobodom in the Techiman North constituency of the Bono East Region.

Performing the sod-cutting ceremony on Wednesday, 9th September 2020, on day two of his 2-day working visit to the Bono East Region, President Akufo-Addo indicated that a total of 5.5 kilometres of roads within Tuobodom will be given a “bitumen face-lift”.

With the mainstay of residents of the town being agriculture, the President was confident that the completion of the road will help facilitate the movement of people, goods and services within the town.

To this end, a contract, to the tune of GH¢10,917,341.04, has been awarded to Stave Mens Co. Ltd., for the construction of the road by the Department of Feeder Roads, an agency under the Ministry of Roads and Highways.

Speaking at the event, the Minister for Roads and Highways, Hon. Kwasi Amoako-Atta stated that a total of seventy-three (73) road projects being undertaken in Bono East Region.

Specific to the town of Tuobodom, Hon. Kwasi Amoako-Atta stated that the Zongo Market road, Chief’s Palace No.1 road and Chief’s Palace No. 2 roads, are examples of the roads that will be constructed under the project.

He reassured all persons whose structures may be affected by the construction will be duly compensated, and urged the Chiefs and people of Tuobodom to help ensure that the process is completed on time.