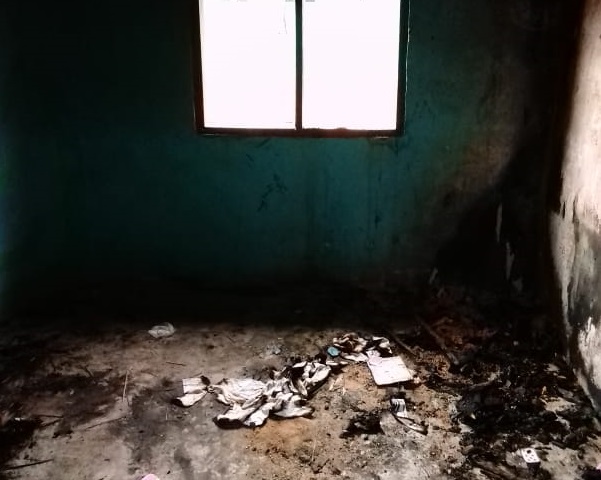 An attempt to flee from a ‘bad’ relationship after breaking up with her boyfriend and seek for greener pastures elsewhere has landed Akua Sakina, a resident of Assin Aworoso in the Assin Central Municipality of the Central Region, in trouble.

Her jealous boyfriend, identified as Kofi Bokor, also a resident of same area, who could not contain the news decided to take her life.

He in the process, set the house in which Sakina together with her siblings, was sleeping in on fire.

Surprisingly, the two have a daughter and Bokor prior to executing his action, carried his daughter to safety.

No lives were lost in the said action carried out by Bokor.

However, the three-bedroom house in which Sakina and her siblings were sleeping in, was razed down.

Bokor has since been arrested by Police and is currently in custody assisting with investigations.

Eyewitnesses say Bokor took the action after Sakina informed him of her decision to end the relationship and travel out of the community for greener pastures.

According to the eyewitnesses, it is the second time Bokor has attempted to take the life of Sakina. He had earlier poisoned her food.

The two lovers, this web portal was informed, are blood related and all efforts by the family to separate them have proved futile.