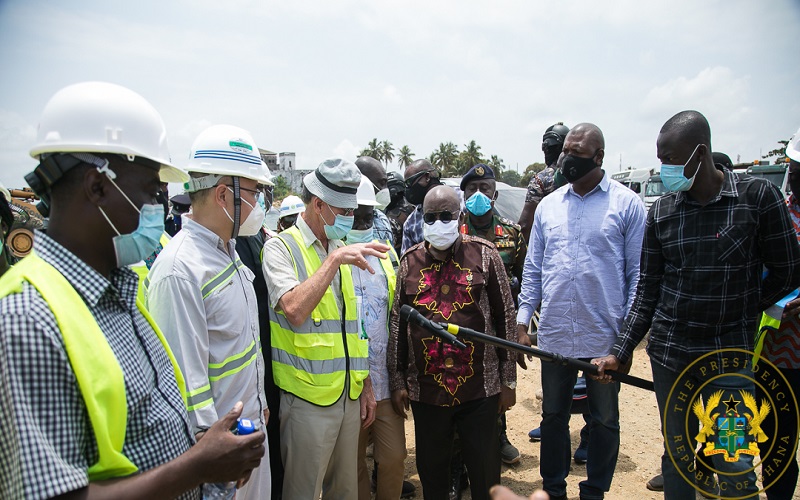 The President of the Republic, Nana Addo Dankwa Akufo-Addo, has inspected ongoing works at the site of the Axim Sea Defence Wall, and the Axim Landing Site, on Tuesday, 18th August 2020, day one (1) of his working visit to the Western Region.

First inspecting work on the construction of the sea defence wall, which is being undertaken by Makam Plant Hire Limited (MPH), the project co-ordinator told President Akufo-Addo that, thus far, the project was expected to be completed in four (4) years.

However, construction work is ahead of schedule with the sea defence wall now 85% complete, with 4.2 kilometres of the 5-kilometre wall completed, with the project co-ordinator assuring the President that the project will be completed on schedule.

It will be recalled that on Sunday, 9th September 2018, after the Kundum Festival, President cut the sod for the construction of the Axim sea defence wall, in fulfillment of the pledge he made to the people of Axim, in the run-up to the 2016 general elections.

Expressing satisfaction about the status of work on the project, the President commended MPH for the work done on the project, and urged them to continue in the spirit that led them to nearly completing the sea defence wall ahead of schedule.

A few metres away from the site, President Akufo-Addo also inspected progress of work on the construction of the Axim Fishing Port and Landing Site Project, a project which commenced on 22nd August 2019.

The project co-ordinator for the contractor, China Harbour Engineering Company, told the President that overall progress: 80% completed; the area behind breakwater has already been sufficiently sheltered against the waves.

Additionally, he added that reclamation is 30% complete, with the fabrication of concrete blocks for the erection of the quay wall set to be completed in November.

With the construction of the underwater quay wall set to be completed in January 2021, the project co-orinator assured President Akufo-Addo that the Axim Fishing Port and Landing Site Project will be completed in September 2021.