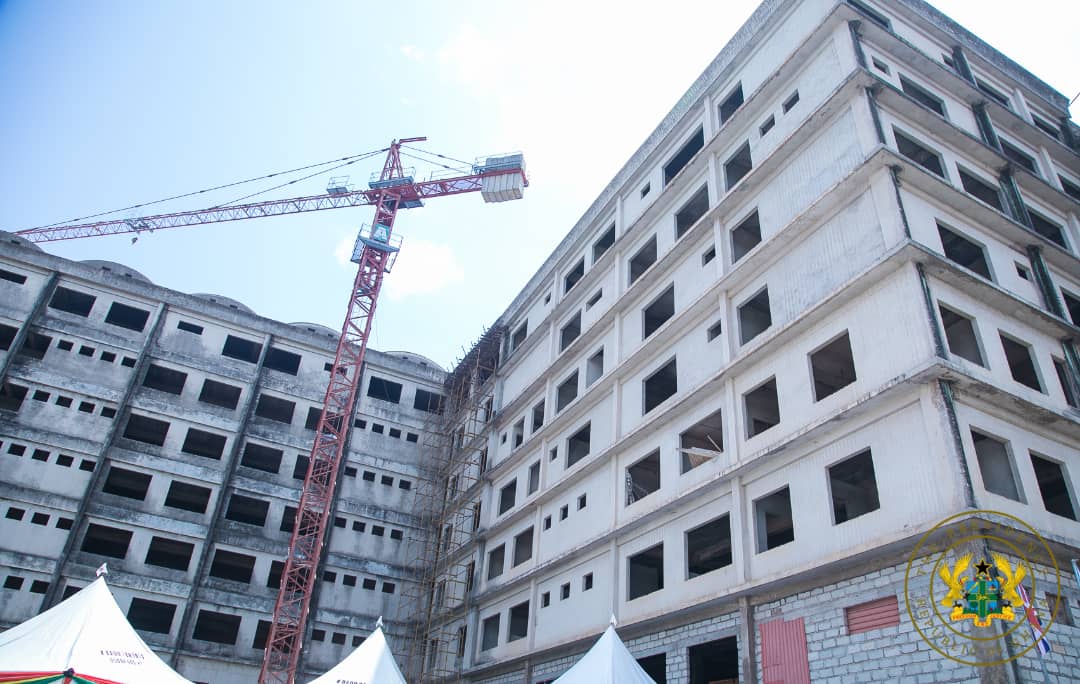 The President of the Republic, Nana Addo Dankwa Akufo-Addo, on Friday, May 15, 2020, cut the sod for the reactivation of work for the construction of the forty-four year old Maternity and Children’s Block of the Komfo Anokye Teaching Hospital.

The project, which is being funded by German Bank, Deutsche Bank, will cost €155 million, and is expected to be completed within 36 months.

The project is being undertaken by Contracta.

Once completed, President Akufo-Addo, stated that the Maternity and Children’s Block will be a state-of-the-art, modern health edifice, with paediatrics, gynaecology and obstetrics units.

“It will serve as a referral centre for twelve (12) of the sixteen (16) regions of our country. It will be a seven hundred and fifty (750)-bed building, with outpatient areas for adults and children, and it will have ten (10) operating theatres and diagnostic rooms, fully equipped with X-Ray, ultrasound, and mammography facilities,” he said.

The President continued, “It will house an intensive care unit, a high dependency unit, isolation rooms and student lecture halls, with the capacity to provide catering services for staff, patients and students”.

Recounting the sequence of events leading up to the reactivation of construction work of the Block, President Akufo-Addo noted that, in 2017, his first year as President of the Republic, he paid a 3-day working visit to the Ashanti Region, where his itinerary took him to the abandoned Maternity and Children’s Block.

He was made to understand, at the time, that this project had begun in 1976, as part of the Komfo Anokye Teaching Hospital Expansion Project, but came to a standstill in 1979. It was reactivated in 1999, under the administration of the 1st President of the 4th Republic, His Excellency Jerry John Rawlings, but again stalled shortly afterwards.

In 2004, the administration of the 2nd President of the 4th Republic, His Excellency John Agyekum Kufuor, took it up, but, soon after his departure from office in January 2009, work on this project was discontinued, until the assumption of office of another NPP administration, the Akufo-Addo government, in 2017.

“In my remarks, after the visit to this project site, I pledged that Government would undertake a comprehensive assessment of the situation, and would ensure that the necessary funds would be secured for the completion of this important piece of health infrastructure,” he said.

This led to the approval by Parliament, in 2019, of a €155 million loan to finish and equip the Maternity and Children’s Block of the Komfo Anokye Teaching Hospital, with the President reiterating his delight at being able to “cut the sod for work to begin finally to complete this ultramodern Maternity and Children Block – a project which is to be carried out within thirty-six (36) months, and whose funding has been fully secured.”

As co-Chair of the Group of Eminent Advocates for the 2030 United Nations Sustainable Development Goals, he stated that finalisation of the project is very dear to his heart, as it will have a positive impact the country’s drive towards achieving the SDG targets under maternal and child health.

The President reinforced the commitment of Government to providing access to healthcare to every Ghanaian, no matter where they are.

“That is the reason for embarking, this year, on the development of eighty-eight (88) district hospitals, ‘Agenda 88’, to ensure every district has a district hospital, and seven (7) regional hospitals for the seven regions that do not have one, all of which are to be done within a year,” he added.

Touching on the COVID-19 fight, the President stressed that the rapid execution of policies, such as the ban on public gatherings, the closure of our schools and borders, has resulted in the country’s low COVID-19 infection, hospitalisation and death rates, some of the lowest in Africa and the world.

He, thus, encouraged all in Asanteman and the rest of Ghana to observe the social distancing and enhanced hygiene protocols.

“Do not forget to wash your hands regularly with soap under running water, use alcohol-based sanitizers, refrain from shaking hands, cover your mouths and noses when you cough or sneeze, wear your masks at all times in public, eat well from nutritious Ghanaian foods, and follow a good diet to boost your immune system,” he said.