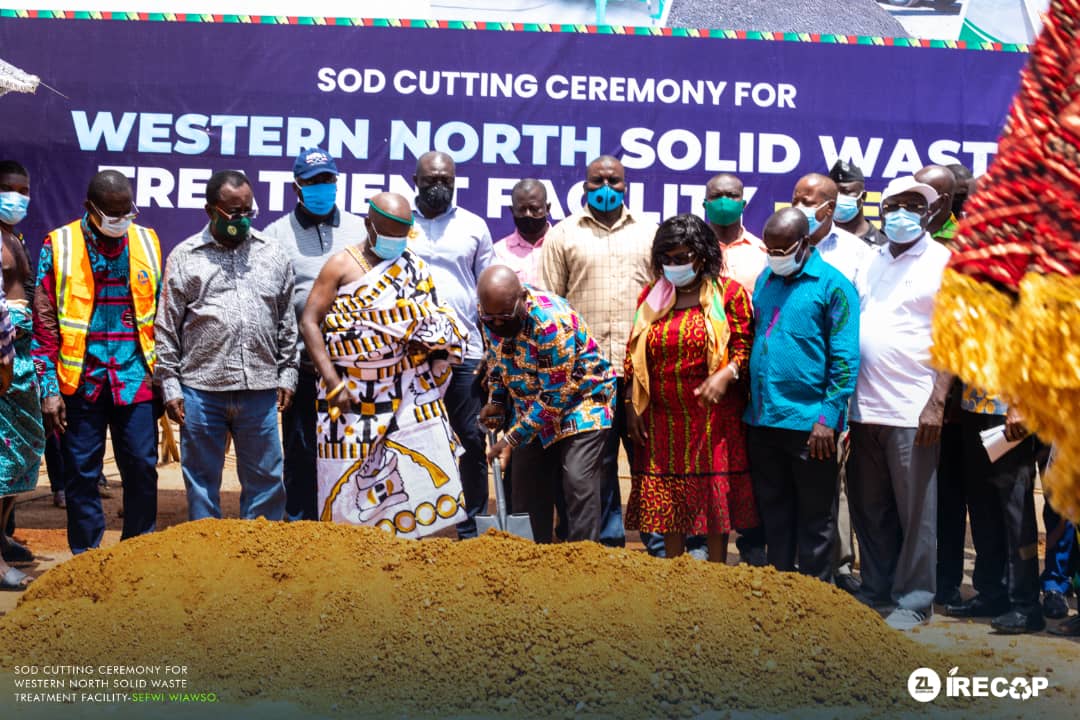 President Nana Addo Dankwa Akufo-Addo on Saturday cut the sod for the construction of an integrated recycling and compost plant at Aboanidua, in the Wiaso Municipal in the Western North Region.

The project, which is expected to be completed within four months, is a collaboration among Zoomlion Ghana Limited (ZGL), its private partners, and the government.

The President said the issue of sanitation was a top priority for his government, hence the reason for the creation of the Ministry of Sanitation and Water Resources (MSWR).

He disclosed that among the benefits of the facility included receiving 200 tonnes of solid waste a day.

According to him, the country would be able to achieve Sustainable Development Goals (SGGs) 6, 3, 8, 11 and 13 with the construction of waste treatment plants in all the 16 regions.

“We are ready to pattern the private sector not only Jospong but any company aimed at providing jobs and improving the economy,” President Akufo-Addo reiterated.

Along this line, the President appealed to the people of Sefwi-Wiaso to give him seven out of the nine constituencies in the area, urging them to vote massively for the New Patriotic Party (NPP).

Currently out of the nine constituencies in the area, only three were occupied by NPP MPs, with the rest being in the hands of the National Democratic Congress (NDC).

The solid waste treatment plant will have facilities for plastic waste recycling, finished products, and spare parts, compost, and sorting workshops, among others.

The Minister of Sanitation and Water Resources, Mrs Cecilia Abena Daapah said a research in 2017 showed that Ghana generates five million tonnes of refuse a day of which 60% can be turned into organic waste while another 80% can be recycled into plastics and other products for reuse.

“Give out your all to support the project, and I also want to advise Ghanaians against capitalizing on the government’s free water initiative to waste water,” She advised.

She said, her ministry constantly engages the Environmental Service Providers Association (ESPA) in ways that waste can be put to good use.

The Executive Chairman of the Jospong Group of Companies, who doubles as the Chief Executive Officer of Zoomlion Ghana Limited, Mr Joseph Siaw Agyepong, thanked the chiefs of Sefwi-Wiaso for making available a 100-acre land for the plant.

He disclosed that the plant, when completed, would create 250 direct and indirect jobs.

“After the sod-cutting by the President, we are starting the construction immediately. All the machines are ready to facilitate the project,” he affirmed.

He praised President Akufo-Addo for his One District-One Factory (1D-1F) initiative, stressing that it was a good vision.

The Minister of Western North, Mr Kingsley Aboagye-Gyedu said the people of Sefwi did not believe his promise of establishing a region but true to his words they now can boast of one.

He said the visit by the President to the region had brought new breadth of wind and thus called on them to vote for the NPP.

“Don’t let the new breed of wind in the region be a 419 but rather remember the NPP, come December 7,” he said.

The Western North plant brings the total number of waste treatment facilities to five in various regions of the country.