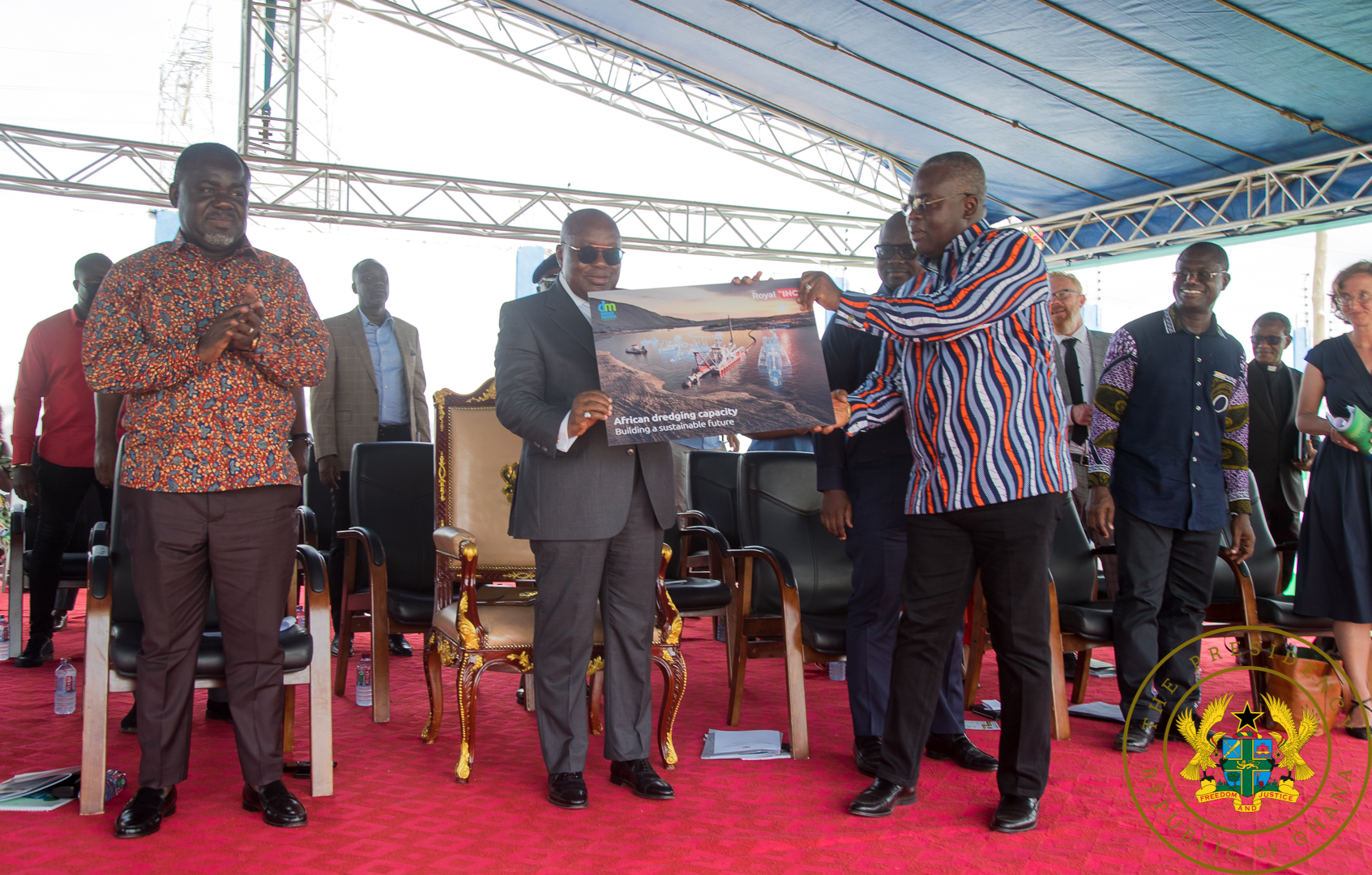 The President of the Republic, Nana Addo Dankwa Akufo-Addo, on Wednesday, 25th May 2022, commissioned four (4) dredging machines, which, he said, will help curb the perennial flooding that affects some parts of the nation, historically, always at this time of the year.

Speaking at the ceremony, held in Ashaiman, in the Greater Accra Region, President Akufo-Addo stated that with many coastal nations susceptible to flooding, it is of the utmost necessity that the integrity of dynamic shorelines is regularly maintained.

Dredging companies, the President said, have, traditionally, contributed to coastal protection projects and the maintenance of shorelines, and have increasingly improved their engineering technologies to achieve this.

“For us, in Ghana, Dredge Masters has made significant contributions to this end, and the introduction, today, of two Ultra-Modern IHC Beaver and two IHC Workboats means that Ghana, and, indeed, the West African market have their own indigenous company, with the capability of dredging to a depth of sixteen (16) metres. We do not need to look outside anymore when it comes to the dredging of dams, reservoirs, ports, harbours and in land reclamation activities,” he said.

The vision of moving Ghana to a situation beyond aid, according to the President, is being assisted by the support being offered by companies such as the Jospong Group.

Touching on the flooding situation that has affected some parts of the country recently, President Akufo-Addo told the gathering that Government, since 2017, has spent some four hundred and fifty million cedis (GH¢450 million) on the flood control programme, which has resulted in reduced incidence of flooding, particularly in the major flood prone areas in Accra, such as the Odaw drainage channel.

“Phase five (5) of the Accra Sanitary Sewer and Stormwater Alleviation Project, which is intended to ensure that the Odaw Channel is free of silt and debris, has been commissioned. Indeed, the construction of nineteen kilometres (19km) of drains has been completed, whilst some one thousand kilometres (1,000km) of drains have been excavated, rechanneled and maintained across the country, as part of efforts to reduce the perennial flooding of Accra,” he added.

However, the President admitted that more needs to be done to deal with the situation permanently, in view of recent events in Accra, and assured that “Government will continue to work towards the day when Ghanaians, especially those in Accra, will live in calm and tranquility through the rainy season”.

President Akufo-Addo revealed that Metropolitan, Municipal and District Assemblies have been charged to ensure that obstructions to the free flow of water, as well developments along waterways, are removed immediately.

“MMDAs are also to ensure the strict adherence of developers to the planning laws of our country, and sanction staff who have issued permits for structures to be built on waterways to serve as a deterrent to others who seek to engage in such acts,” he said.

The President continued, “to ensure these directives are strictly complied with, I have established a monitoring unit at Jubilee House, that will be reporting directly to me on the progress of the implementation of these measures. I am, thus, putting all MMDCEs on notice. You will be held accountable for any breaches that result in damage from flooding. As President of the Republic, I will not allow the selfish acts of a few to jeopradise the collective futures of the rest of us.”

Whilst Government does its part, President Akufo-Addo admonished “unpatriotic citizens” to stop the dumping of refuse into open drains.

“Regardless of the investment that is made in the construction of well-engineered drains, the indiscriminate disposal of solid waste into open drains and channels will reduce our capacity to end the problem of flooding. I urge all those engaged in such practices to put an end to it,” he added.