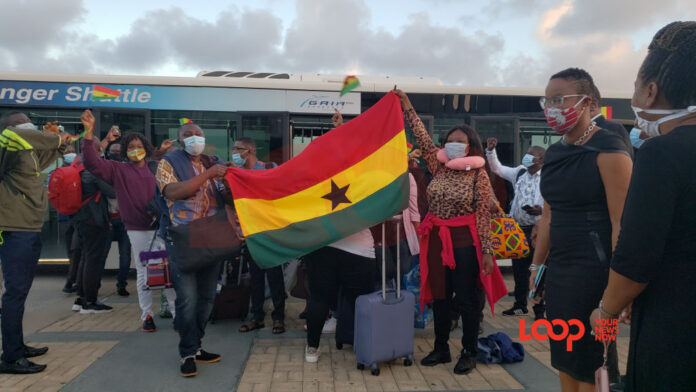 Some Ghanaian nurses numbering ninety-five (95) have arrived in Barbados to begin their initial two-year contract service in healthcare delivery. They arrived on a chartered flight, Azores Airlines at the Grantley Adams International Airport on Thursday, July 30, 2020. The health professionals were made up of 49 females and 46 males.

According to a local Ghanaian news portal, www.kasapafmonline.com, the nurses were met by the Minister of Health and Wellness Lieutenant Colonel Jeffrey Bostic, newly-installed Minister of Tourism and International Transport Senator Lisa Cummins and Executive Chairman of the Queen Elizabeth Hospital, Juliette Bynoe-Sutherland, with salutes and elbow bumps.

The Health Minister said while their arrival was a long time in coming, he was glad they had finally landed.

“These nurses will be working at the Queen Elizabeth Hospital as well as the primary healthcare sector, that is the Geriatric Hospitals and polyclinics,” he said.

Speaking on behalf of the contingent from Ghana, Nursing Officer Lorraine Atopley said:

“Thank you very much for welcoming us and greetings from her President Nana Akufo-Addo and all the human resources personnel from the Ministry of Health (in Ghana), greetings from them.”

She said that the team of nurses hopes to have “good interactions” with the patients “for the next two or more years.” When she added: “or more,” there was laughter and cheers from her colleagues and Barbados’ Minister of Health Lt Col Jeffrey Bostic, Minister of Tourism Senator Lisa Cummins along with other officials from both their ministries.

Atopley also added: “We promise to work hard to deliver good service to everyone and be at peace with everyone.”