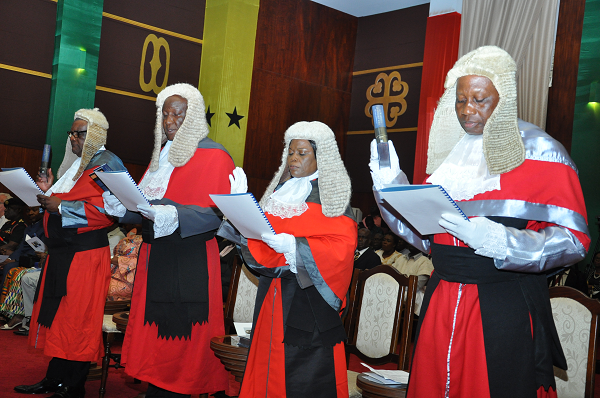 A seven-member panel of the Supreme Court has directed the Electoral Commission (EC) of Ghana to furnish it with the legal basis why it omitted the inclusion of the existing voters ID card from the list of national IDs acceptable for the upcoming compilation of a new voters register.

The NDC instituted the action through the chambers of the former Deputy Attorney General in the Mahama administration, Dr. Dominic Aryine, (Ayine and Felli Law Office) seeking among others “a true and proper interpretation of Article 45(a) of the 1992 Constitution, on whether the EC has the constitutional power to, and can, compile a register of voters only once, and thereafter revise it periodically, as may be determined by law”.

The opposition party was also seeking a declaration on whether the EC “can only revise the existing register of voters, and lacks the power to prepare a fresh register of voters, for the conduct of the December 2020 Presidential and Parliamentary Elections”.

The NDC additionally was seeking “a declaration that, upon a true and proper interpretation of the provisions of the Constitution, particularly article 42, upon the registration of and issuance of a voter identification card to a person, that person has an accrued right to vote which cannot be divested in an arbitrary and capricious manner”.

The two respondents in the case, the Electoral Commission and the Attorney General, through their lawyers filed their responds in opposition to the application by the NDC.

Lawyer Justin Amenuvor on behalf of the Electoral Commission described the prayer of the NDC as “an interpretation by the party to serve its parochial interests not a proper appreciation of the 1992 Constitution as a whole”.

The Supreme Court in its ruling today the 4thof June 2020, ordered tbe EC to furnish the Court with the legal basis for their decision. The Court also asked the applicant to do same if it has any legal arguments within the same timelines given to the EC in order not to delay the case. The court further adjourned sitting to the 11th of June 2020 for the case to take its natural course.