The Police have arrested two persons in the Upper West Region for allegedly robbing and injuring two victims. The suspects, Musdeen Issahaku and Alhassan Musah who were part of a team of four on a robbery spree on Saturday dawn, November 13, 2021, in the Wa West District of the Upper West Region, stabbed two […] 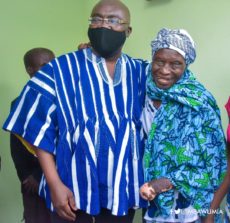 In yet another example of his love for humanity the Vice President, Dr Mahamudu Bawumia, has built, furnished and formally handed over a two-bedroom house to an 82 year old cured leper who had been abandoned by her family at Motori in the Wa West District of the Upper West Region.