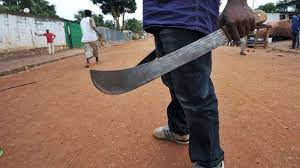 A man identified as Amankwah, Wednesday morning, met his untimely death at Brekum in the Bono Region, when he went to the house of one of his debtors, a teacher, to demand repayment of GH₵100.00 he borrowed him some time ago.

Amankwah, according to an eyewitness, was allegedly butchered to death by the teacher after confronting him over the said money.

The teacher, is said to have taken to his heels after allegedly committing the crime.

Sources say, when Amankwah stormed the teacher’s house, he was offered a seat following which he was attended to by the teacher over his mission to the house.

He is reported to have told the teacher to repay the loan he took from him since the repayment period had elapsed.

However, the teacher was reported to have denied borrowing the money. According to the eyewitness, the teacher told Amankwah that he was a guarantor to a friend and therefore, was not responsible for the repayment of the loan.

He later told Amankwah to wait for him following which he entered his room and later came out with a machete to allegedly butcher his victim.

The eyewitness say it was very difficult for people around to intervene considering the way the teacher was allegedly butchering Amankwah.

Having rendered Amankwah motionless, the teacher took to his heels and has since not returned.

The lifeless body of Amankwah was later taken to the hospital by some tenants in the house. He was pronounced dead on arrival, according to sources. His body has since been deposited at mortuary.

Local Police say they have launched investigations into the matter.