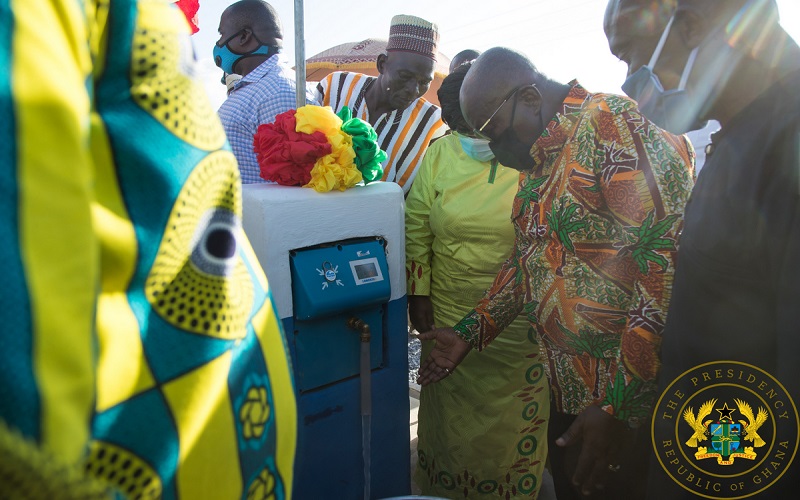 A new two hundred (200) cubic metre high level tank, and two (2) rehabilitated steel tanks, both with a capacity of one hundred and twenty (120) cubic metres, will serve as storage for the water.

Speaking at the ceremony to commission the Water Supply Project on Saturday, 10th October 2020, the President noted that, in addition to Hamile-Happa, Lambussie is another beneficiary of the rural water supply system of the Upper West Region.

“Indeed, the Upper West Region has also benefitted from the drilling and construction of two hundred and fifty (250) boreholes, fitted with hand-pumps, to improve access to potable water in two hundred and forty (240) communities in five (5) Districts, namely the Daffiama-Bussie-Issa, Sissala West, Lawra, Jirapa and Nandom Municipalities,” he added.

President Akufo-Addo told the gathering at Hamile that the Community Water and Sanitation Agency (CWSA) has also completed water system designs for the construction of ten (10) more Small-Town Piped Water Systems in Pulima and Fielmour in the Sissala West District, in Eromon and Dowine in the Lawra Municipality, in Koo-Tuopare and Gou Zumapare in the Nandom Municipality, in Ullo and Duori in the Jirapa Municipality, and in Bussie and Issa in the Daffiama-Bussie-Issa District.

These water systems that have been designed, he assured, will be constructed under the next phase of the World Bank funding facility, adding that “under this same Sustainable Rural Water and Sanitation Project, the CWSA has facilitated the construction of five thousand, three hundred and fifty-five (5,355) household latrines in the Upper West Region Region.”

Additionally, he stated that “2,014 digni-loo latrines have been provided for households to ensure that the communities have access to improved latrines. It is important to stress that the Region has achieved Open Defecation Free status in one hundred and four (104) communities, largely as a result of this intervention.”

President Akufo-Addo was expectant that, with the availability of potable water in Hamile now, new investors will take advantage of Government’s 1-District-1-Factory flagship programme to establish small and medium scale factories, in order to open up the area for development, provide employment opportunities to the youth and improve the local economy.

“These are the Rural Communities and Small Towns Water Supply Project, otherwise known as the Aqua Africa Water Project, which will benefit one hundred and fifty (150) communities in the Ashanti, Eastern, Greater Accra, Oti and Volta Regions, and Phase III of the Water Supply Scheme for Central Tongu, Adaklu Anyigbe, Agotime-Ziope Districts and the Ho Municipality. In addition, Government, through the Ministry of Sanitation and Water Resources, has awarded contracts for the construction of six hundred and forty-five (645) mechanised borehole systems nationwide,” he added.

This Sustainable Rural Water and Sanitation Project, begun in 2017, has been financed with a credit facility from the World Bank, amounting to forty-seven million, five hundred thousand United States dollars (US$47.5 million).

The Project components include the construction of piped water supply systems, support for household latrine construction, health and hygiene education, and environmental and social safeguards.

The Rural Water Project has been implemented successfully in ten (10) other Regions, namely Central, Ahafo, Bono, Bono East, Northern, Savannah, North East, Western, Western North and Upper East. Some four hundred and thirty-two thousand, six hundred and nine (432,609) people are beneficiaries of this project, whose aim is to increase access to potable water for all, in fulfillment of the New Patriotic Party’s commitment of “Water For All”.